1 - Introduction
Israel has 48 airports, the largest and most well known being Ben Gurion International Airport (TLV) located near Tel Aviv, which is used by most international flights to Israel. In 2011, 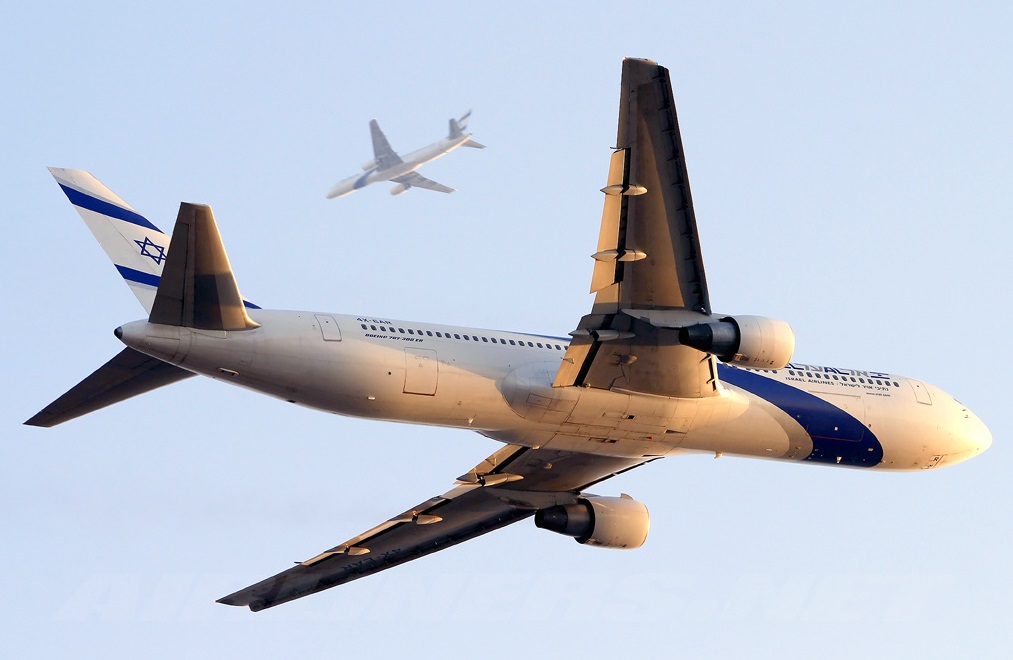 According to the Israel Civil Aviation Authority, as of 2012, Israel's civil aircraft fleet consisted of 59 aircraft
48 of these were Boeing jets, 2 Airbus,8 turbo-prop produced by ATR,and 1 Embraer jet. the Israeli airlines orders another 2 embraer jets, 1 atr jet, 5 airbus jets, and 10 boeing jets.
The estimated number of aircraft that Israeli Airlines will have in 2017-2018 is 65-70.
Airlines include El Al Israel Airlines, Sun d'Or International Airlines, Arkia Israel Airlines and Israir Airlines. Boeing estimates that 60-80 new aircraft will be purchased by Israeli airlines over the next 20 years.

2.1.1 - Introduction
El Al Israel Airlines, is the flag carrier of Israel.Since its inaugural flight from Geneva to Tel Aviv in September 1948, the airline has grown to serve some 45 destinations, operating scheduled domestic and international services and cargo flights to Europe, North America, Africa and the Near and Far East from its main base in Ben Gurion International Airport.

El Al in principle offers only kosher in-flight meals and does not fly passengers on the Jewish Sabbath or religious holidays.It is considered one of the world's most secure airlines, thanks to its stringent security procedures, both on the ground and on board its aircraft.
As Israel's national airline, El Al has played an important role in humanitarian rescue efforts, airlifting Jews from other countries to Israel, setting the world record for the most passengers on a commercial aircraft (single plane record of 1,122 passengers) by Operation Solomon when 14,500 Jewish refugees were transported from Ethiopia in 1991.

In 2012, El Al operated an all-Boeing fleet of 38 aircraft, flying over 4 million passengers, and employed a staff of 6,056 globally.

2.1.2 - History
The airline was incorporated and became Israel's national flag carrier on 15 November 1948.
A regular service to London was inaugurated in the middle of 1950.
El Al's cargo service was inaugurated in 1950 and initially relied on military surplus Curtiss C-46 Commando aircraft. Same aircraft type was used also for passengers transportation in certain routes.
The same year the airline initiated charter services to the United States, followed by scheduled flights soon afterwards.
The airline was involved in several covert operations: In the early 1950s, El Al airlifted over 160,000 immigrants to Israel from India, Iran, Iraq and Yemen as part of Operation Magic Carpet and Operation Ezra and Nehemiah.
In 1960, Nazi war criminal Adolf Eichmann was captured and flown from Argentina to Israel on an El Al aircraft.
In the late 1950s, EL AL buy several Boeing 707 jet airliner. On 15 June 1961, the airline set a world record for the longest non-stop commercial flight: an El Al Boeing 707 flew from New York to Tel Aviv, covering 5,760 miles (9,270 km) in 9 hours and 33 minutes.
In 1968, El Al experienced the first of many acts of terrorism that have been perpetrated against the airline.

El Al acquired its first Boeing 747 in 1971. Many felt it was a risky purchase given the high cost of the plane and fear of attacks, but El Al operations flourished after the purchase. Another 747 was delivered in 1973 and was used to start non-stop service from Tel Aviv to New York (707s had flown the eastward nonstop since around 1961).

In 1977 El Al established a charter subsidiary, El Al Charter Services Ltd., later renamed Sun D'Or International Airlines Ltd.
As the political situation in Iran deteriorated, El Al began to airlift Jews to Israel.El Al flights to Cairo were inaugurated in April 1980, following the Israel–Egypt Peace Treaty.
It broke another record, since then surpassed, in May 1988 with a non-stop flight from Los Angeles to Tel Aviv, a journey of 7,000 nautical miles (13,000 km) in 13 hours and 41 minutes.

In the 90s, El Al was operating a fleet of 20 aircraft, including nine Boeing 747s, and had begun replacing its aging Boeing 707s with the Boeing 757.
Early that year, following the collapse of the Soviet Union, in cooperation with Aeroflot, El Al flew more than 400,000 Jewish immigrants to Israel within a three-year period.

On 24 May 1991, an El Al Boeing 747 cargo plane airlifted a record-breaking 1,087 Ethiopian Jews from Addis Ababa to Israel in the framework of Operation Solomon.
Three babies were born during the flight. The plane carried twice as many passengers as it was designed for.In less than 36 hours, 14,500 Ethiopian Jews were flown to Israel.
On 27 April 1994, El Al received its first Boeing 747-400.
In June 1996, El Al recorded its first flight from Israel to Amman, Jordan.
In 1996, El Al recorded US$83.1 million in losses, due to the resumption of terrorist activities and the government's open skies policy.To keep its planes flying during this period, El Al introduced flights "to nowhere": passengers were offered various kinds of in-flight entertainment as the plane circled the Mediterranean. One-day shopping trips to London and visits to religious sites in eastern Europe were also promoted.
In 1997, El Al opened a separate cargo division. El Al's first Boeing 777 embarked on its maiden flight in March 2000.
The first phase of the long-delayed privatization of the company commenced in June 2003 .
By June 2004, 50% of the company had been sold to the public.
By January 2005, a controlling share of the company had been transferred to Knafaim-Arkia Holdings Ltd.

2.2.1 - Introduction
Sun d'Or International Airlines Limited was an Israeli airline with its hub at Tel Aviv's Ben Gurion International Airport.
It was operate scheduled and charter flights. It was a fully owned subsidiary of El Al and operates regular, ad hoc, and seasonal passenger charters using aircraft leased from El Al.
The airline was licenced for the commercial transport of passengers and cargo on charter flights to and from Israel and owned an Air Operator Certificate to operate two leased planes that were fully serviced by El Al's maintenance.
Most of the airlines services were between Tel Aviv and European destinations.

As of March 2013, all Sun d'Or's flights are operated by El Al under Sun d'Or, Arkia and Israir brand.

2.2.2 - History
Sun d'Or was established on 1 October 1977 as El Al Charter Services Ltd., as a subsidiary of El Al at a time when the airline was fully owned by the State. The airline changed its name in 1981 to Sun D’Or, and soon after chose to add "International Airlines" to the airline's name to create Sun D'Or International Airlines.
In 1988 Sun d'Or had its head office in the El Al House in Tel Aviv.
Since April 2001, Sun D'Or had grown to become a significant player in the Israeli charter market. The airline also operated flights for incoming tourists, on behalf of European and Israeli operators. In January 2005, Sun D'Or became a private company following the privatisation of El Al.

The airline had introduced a new look website and were to apply the same to their fleet as well.

2.3.1 - Introduction
Arkia Israeli Airlines Ltd commonly referred to as Arkia, is an Israeli airline. Its head office is on the grounds of Sde Dov Airport in Tel Aviv, Israel.
It is Israel's second-largest airline,operating scheduled domestic and international services, as well as charter flights to destinations in Western Europe and across the Mediterranean. Its main base is Sde Dov Airport, with hubs at Eilat Airport and Ovda International Airport.

2.3.2 - History
Arkia was founded in 1949 as Israel Inland Airlines when it became clear that there was demand for a local airline to connect Tel Aviv with different regions of the then-new state of Israel, especially with Eilat, Israel's important seaport situated on the Gulf of Aqaba.Flights commenced in 1950 with De Havilland DH.89 aircraft, followed by Douglas DC-3s, to inter-connect major towns in Israel from Rosh Pina in the North to the port of Eilat in the South.
El Al held a 50% stake in the airline at this time with the Histadrut, Israel's labour federation, being the other shareholder.
The airline later adopted the name Eilata Airlines - Aviron, and Arkia Israel Airlines.
In its first year of service, Israel Inland Airlines carried 13,485 passengers, using a Curtis Commando.

During the 1950s, the airline continued to grow, upgrading its fleet to the larger DC-3.
The airline grew quickly during the 1980s, moving both into the international charter market and airline maintenance. The airline is now owned by Kanaf-Arkia Airlines (75%) and airline employees (25%).
In February 2007, the Israeli Tourism Ministry awarded Arkia a scheduled operator's licence for flights to Larnaca, a destination dropped by EL AL, and Dublin.
In July 2007, it was announced that the airline planned to file for further scheduled carrier status on routes to New York City and Bangkok, currently served under charter status.
Furthermore, in early 2008, after the Israeli Tourism Ministry opened up the airline market, the airline applied for scheduled carrier status for routes to Barcelona, Berlin, Moscow, and Paris.
The licence for Paris was granted in February 2008,
At this time, the airline also announced that it would add two Boeing 737 aircraft to its fleet within two years, as well as four Boeing 787 Dreamliner aircraft it had on order.

2.4.1 - Introduction
Israir Airlines Ltd, usually referred to as Israir, is an airline based in Tel Aviv, Israel.
It operates domestic scheduled and air taxi flights from Sde Dov Airport, Haifa Airport, Ben Gurion Airport, and Eilat Airport, as well as international charter services from Ben Gurion International Airport to Europe and Asia. It also operates VIP flights, and is Israel's third-largest airline after El Al Israel Airlines and Arkia Israel Airlines, employing some 350 staff.
The airline is said to have modeled itself on US low-cost carrier.

2.4.2 - History
Israir Airlines was established in 1989 as Knafei HaEmek (Valley Wings) before changing its name to Israir Airlines in 1996. It is now wholly owned by the Ganden Group.
The airline began with domestic services from Eilat Airport, Ben Gurion International Airport, Sde Dov Airport, and Haifa Airport in the north of the country. It expanded its operations to begin international charter flights in 1999, building up a route network that now covers much of Europe, as well as regularly flying to other destinations in Asia, Africa, and North America.

The airline expanded operations across the Atlantic when regular charter service to New York City's Kennedy International Airport was started in June 2004.
In early 2007, the airline announced plans to introduce Sky-Torah scrolls on each of its aircraft.These were effectively Torah scrolls which would be carried on board its flight for Jewish passengers to use for prayer. This is a first for any Israeli airline and was seen by many as a means to attract many Haredi passengers to the airline at a time when they were showing great dissatisfaction with arch-rival, El Al, following their flying of aircraft on the Shabbat.
Later on in 2007, Israir sparked controversy once again when a passenger announced he was filing a lawsuit against the airline for misadvertising the legroom they offered on their aircraft.
In early 2008, when restrictions were lifted on Israeli airlines' destinations, Israir applied for designated carrier status on routes from Israel to London, Paris, Berlin, Moscow, Amsterdam, Rome, Budapest, Las Vegas, and Miami - some of which are destinations currently served by the airline as charter routes.