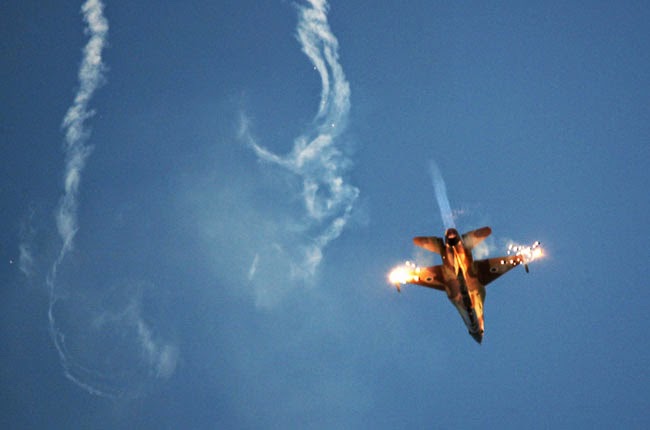 Israeli aircraft targeted sites in the Gaza Strip late Saturday night in retaliation for rockets fired at southern Israel earlier in the day, the IDF said.


“In response to the three rockets fired earlier this evening at Israel an IAF aircraft targeted three terror activity sites, two weapon storage and manufacturing facilities in the southern Gaza Strip, as well as a terror activity site in the central Gaza Strip,” the IDF said. “Direct hits were confirmed.”
The Israeli strike came hours after sirens wailed in the Hof Ashkelon area, signaling a rocket attack. The rockets landed in fields and did not cause casualties or damage.
On Thursday, Israel carried out a targeted strike in Gaza against a Palestinian man who was allegedly involved in rocket attacks against Israel.
The man, whom the IDF identified as 33-year-old Hamas policeman and Salafist activist Mohammed Awwar, was killed in the airstrike.
Awwar was involved in two rocket attacks on southern Israel in April and an attempt to down an IDF helicopter, the army said in a statement. It said Awwar was planning more attacks when he was hit.
Ya’alon said that Israel would not tolerate “sporadic [rocket] fire or terrorism attempts whose aim is to disrupt the lives of residents of the south and harm our forces.”
The health ministry in Gaza said Saturday that Ali al-Awour, a seven-year-old boy who was wounded in the airstrike Thursday, had succumbed to his injuries.
Link
Publié par jkkljkljkljkl à 8:59 AM