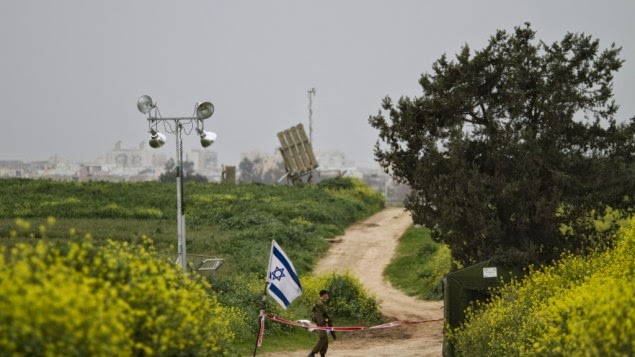 Israeli forces positioned an Iron Dome anti-missile battery outside the southern coastal city of Ashdod Sunday, in response to an escalation in rocket fire from the Gaza Strip over the weekend.


The move came hours after Israeli planes pounded several sites in the Gaza Strip, in retaliation for rockets fired earlier in the day.
Ashdod, a city of some 200,000, sits several kilometers from the Gaza Strip and has been targeted with rockets in the past.
On Saturday, several rockets were fired toward Ashkelon, all of which landed in open fields and did not cause any injuries or damage.
Israel responded with a large sortie over Gaza, its second since Thursday.
“In response to the three rockets fired earlier this evening at Israel, an IAF aircraft targeted three terror activity sites and two weapon storage and manufacturing facilities in the southern Gaza Strip, as well as a terror activity site in the central Gaza Strip,” the IDF said. “Direct hits were confirmed.”
On Thursday, a Gazan rocket damaged a road in the Eshkol region.
Hours later, Israel carried out a targeted strike against a Palestinian man who was allegedly involved in rocket attacks against Israel.
The IDF said it targeted Mohammed Awwar,33, a Hamas policeman and Salafist activist. Awwar was involved in two rocket attacks on southern Israel in April and an attempt to down an IDF helicopter, the army said in a statement. It said Awwar was planning more attacks when he was hit.
The health ministry in Gaza said Saturday that Ali al-Awour, a seven-year-old boy who was wounded in the airstrike Thursday, had succumbed to his injuries.
Also on Sunday, as part of the heightened security procedures implemented by Israel in response to the Thursday kidnapping of three West Bank teenagers, the crossings between Gaza and Israel were closed indefinitely.
Link
Publié par jkkljkljkljkl à 1:20 PM