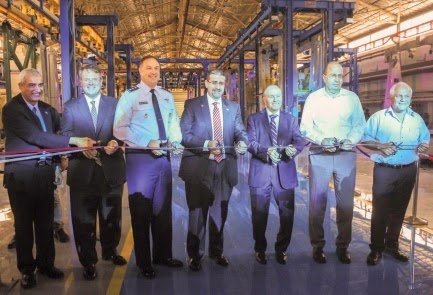 Israel Aerospace Industries on Tuesday inaugurated its production line for the wings of the F-35 stealth fighter jet.

The automatic production line, in which tens of millions of dollars were invested, will build four pairs of wings per month, which will then be attached in the U.S. to the bodies of the aircraft.
Over the next decade, IAI will produce more than 800 pairs of wings, to be supplied to Lockheed Martin, the manufacturer of the F-35. Deliveries will begin in 2015.

Another Israeli company, Elbit Systems, will produce helmets for F-35 pilots.
Israel has bought 19 F-35s for $2.75 billion, with deliveries expected to begin in 2016, and could soon order between 25 and 31 more of the planes, according to defense sources.

At a ceremony on Tuesday to mark the opening of the wing production line, Defense Minister Moshe Ya'alon praised the close ties between Israel and the U.S.

"The special relationship between the United States and Israel is stronger than any disagreement," Ya'alon said. "The U.S. has given Israel extensive assistance over the years, especially in the defense field, and it helps Israel meet the challenges it faces."

Ya'alon also mentioned his recent visit to Washington.
"I felt no cold shoulder when I was in Washington," Ya'alon said, referring to recent reports that he was shunned by top Obama administration officials during his trip.

U.S. Ambassador to Israel Dan Shapiro also spoke at Tuesday's ceremony, saying, "In today's world, with actors seeking to cause harm to both our countries, it's reassuring to know that the United States and Israel will always support each other and each other's security."
Link
Publié par jkkljkljkljkl à 8:36 PM