In this post, an overview of the Anti-Aircraft vehicule displayed in Beer Sheva Museum will be done. 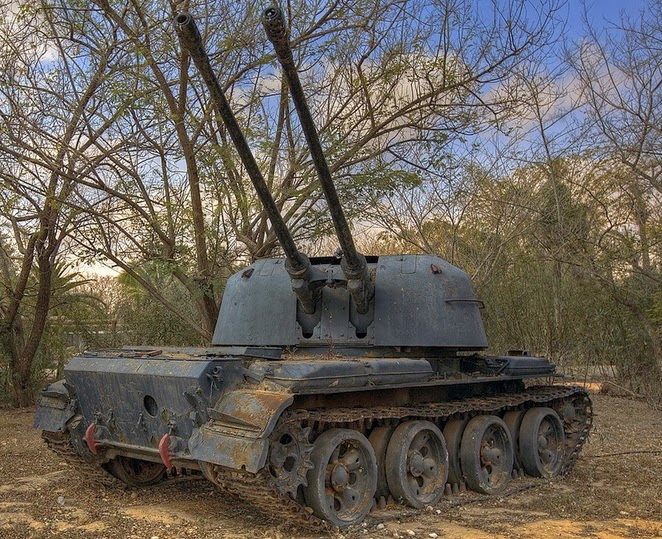 System againt missile batteries wich was initiated by IDF Commander, David Ivrie, during the 70's. The system was developed as an answer to the great loss IAF's aircraft suffered from anti-aircraft batteries. The system is designed from a launcher, missile and an accelerator, which are mounted onto a Sherman tank for portability purposes. The Shrek missile locks onto a battery radar's electromagnetic waves, destroys the radar and strikes the missile battery. In June 1982, the IAF went on a mission order to destroy ground to air missile batteries in Bekka Valley Lebanon. The battle in which the "Chachlilit" took part was a great success to the IAF which stroked 20 enemy anti-aircraft batteries with no losses of their own. 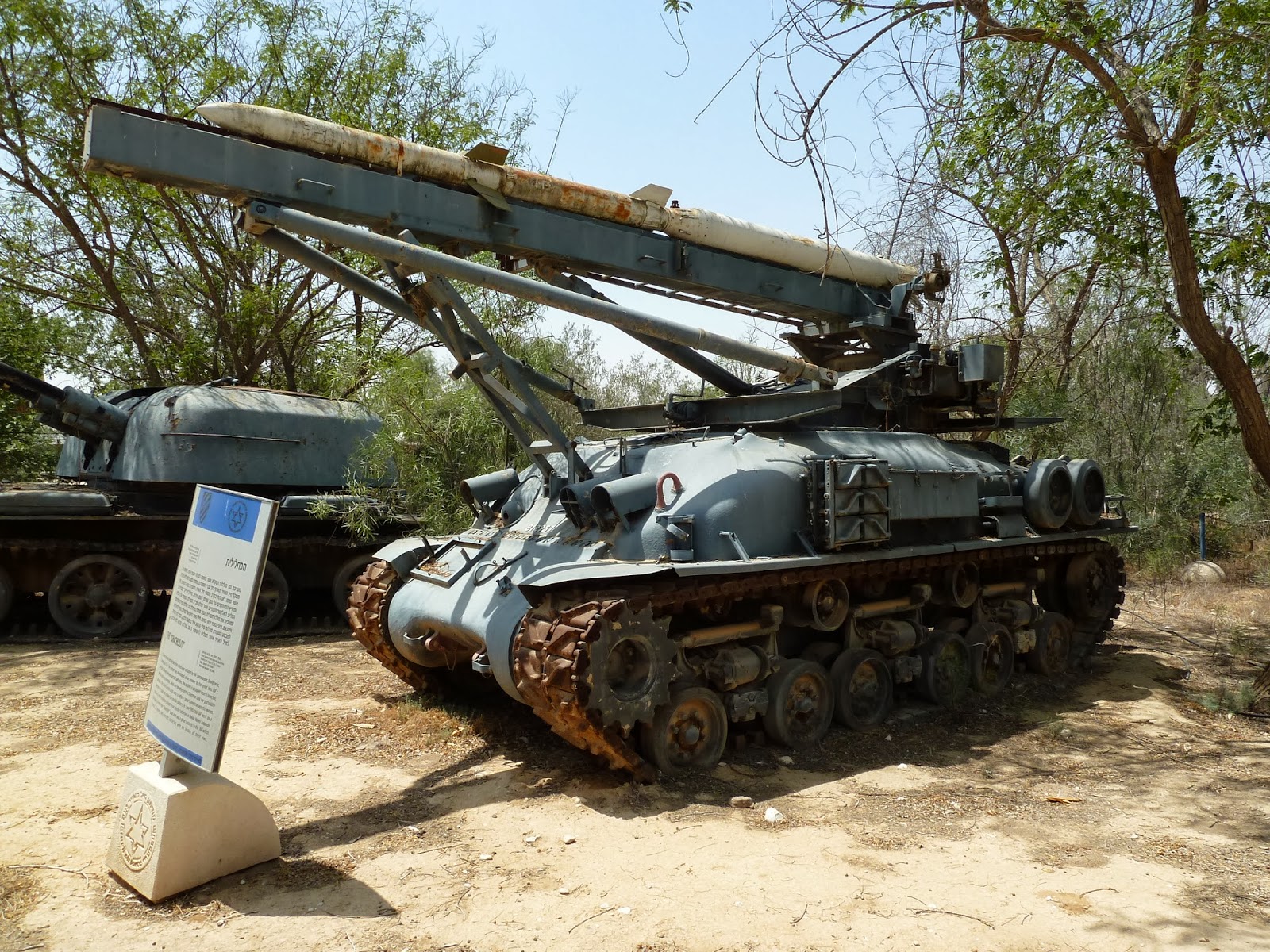 The 23 mm cannon is the most useful and common amongst the anti-aircraft cannons. With the end of the Yom Kippur War (1973) these cannons were found, examined and renovated. The 23 mm cannon is an easy to use cannon, since it does not have electronic or radar systems. The cannon is small, light weight, has easily movable characteristics, as well as the fact that its wheels, can be fold in, allowing it to be loaded onto a truck, plane or heavy helicopter. It's simplicity and power make this cannon very popular in terrorist raids as it is easy to mount on a truck and quickly shoot a low altitude targets. This cannon is widely used around the world and over 60 countries still use this cannon, amongst them: Egypt, Iran, Iraq, Lybia and Syria 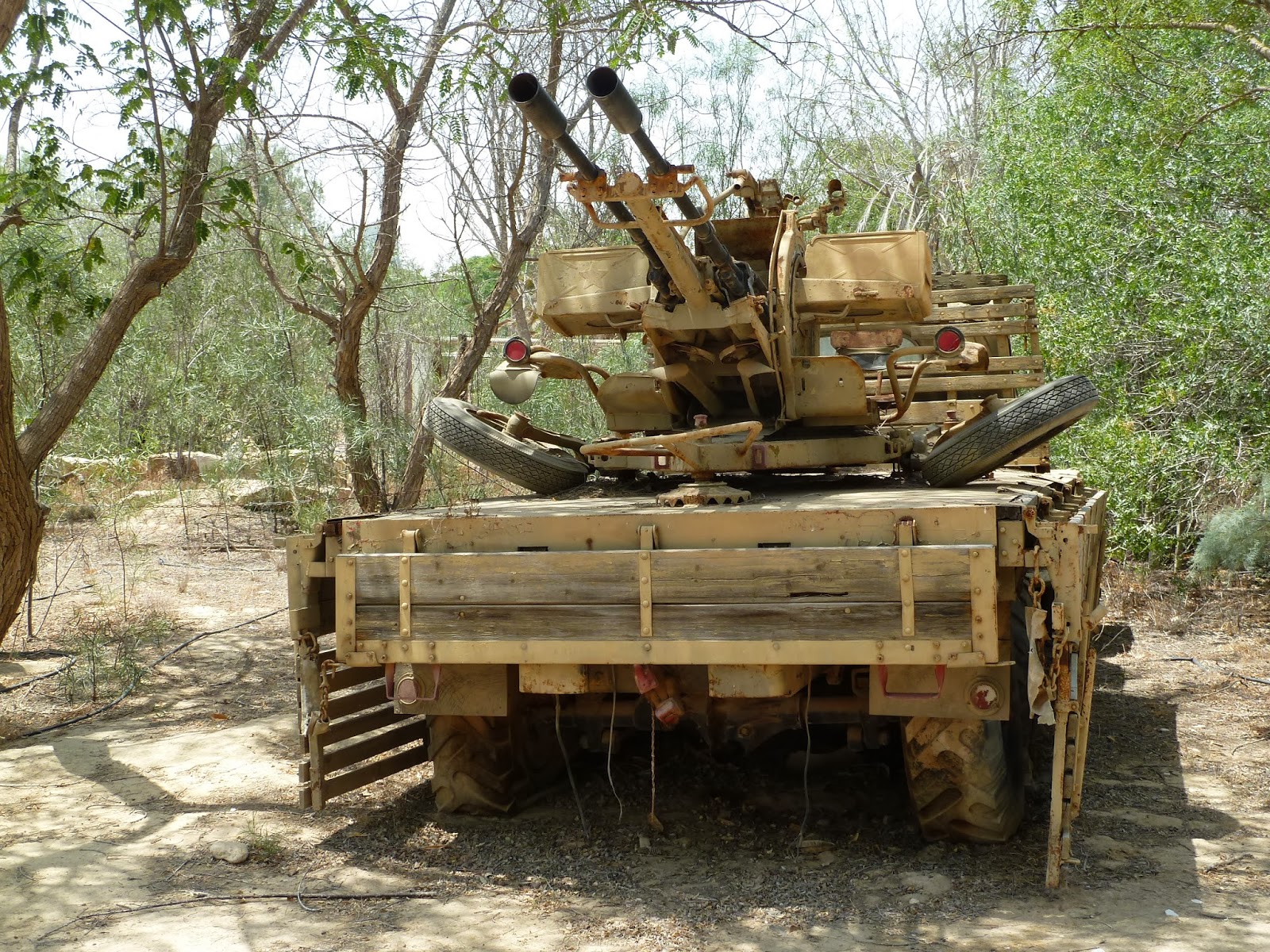 The "Keres" is a system against anti-aircraft batteries. The system is designed from a launcher which carries 3 STANDARD ARM missiles mounted onto a Rio truck. The STANDARD ARM missiles locks on the ground to air battery's radar's electromagnetic wave, hits the radar and allows destruction of the ground to air batteries. The "Keres" is long ranged with advanced portability and quick field's formation abilities. During operation "Peace in the Galilee", on 9/6/1982, the "KERES" missile system took part in the destruction of ground to air missiles batteries with the IAF's attack in Bekka Valley, Lebanon. 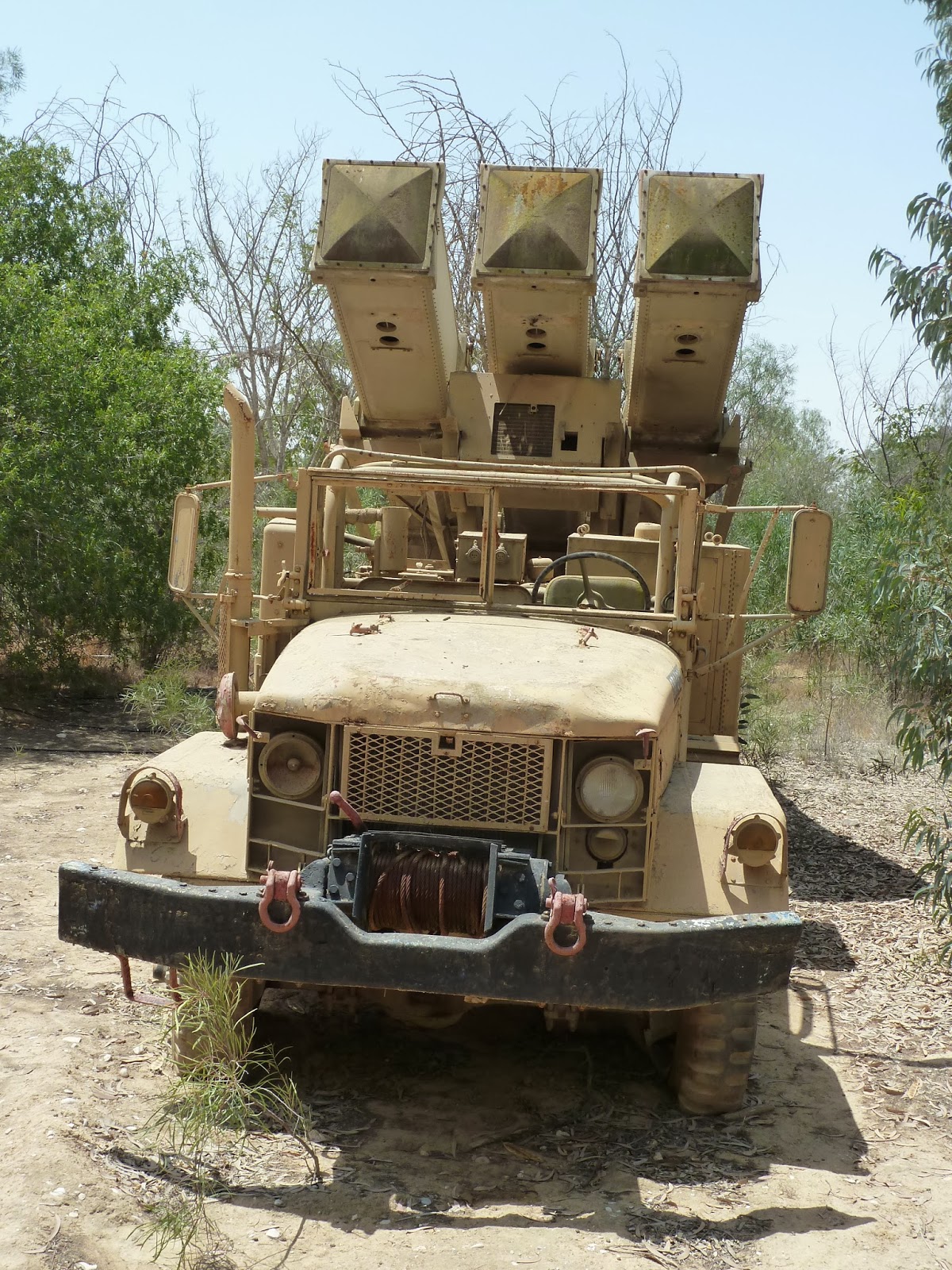 One of the first anti-aircraft cannons in Israel. During the battles un northern Israel, which was named "The war Over the Water" (1962-1967), this cannon participated in firing at Syrian post while the Syrian were attempting to channel the Jordanian water. The army used the Hispano Suiza Cannon as a substitute for the heavy and complicated field cannons because of its long ranged capabilities and its precision. On November 13th, 1964, during crossfire between Syrian forces and 30mm cannons, four anti-aircraft fighters were killed by tank fire. Despite the massive crossfire, the cannon functioning commander, Eli Baruch, was able to hit the enemy. For his bravery, ha was awarded a certificate of recognition from Ezer Weitzman who was commander of the IAF during that time. 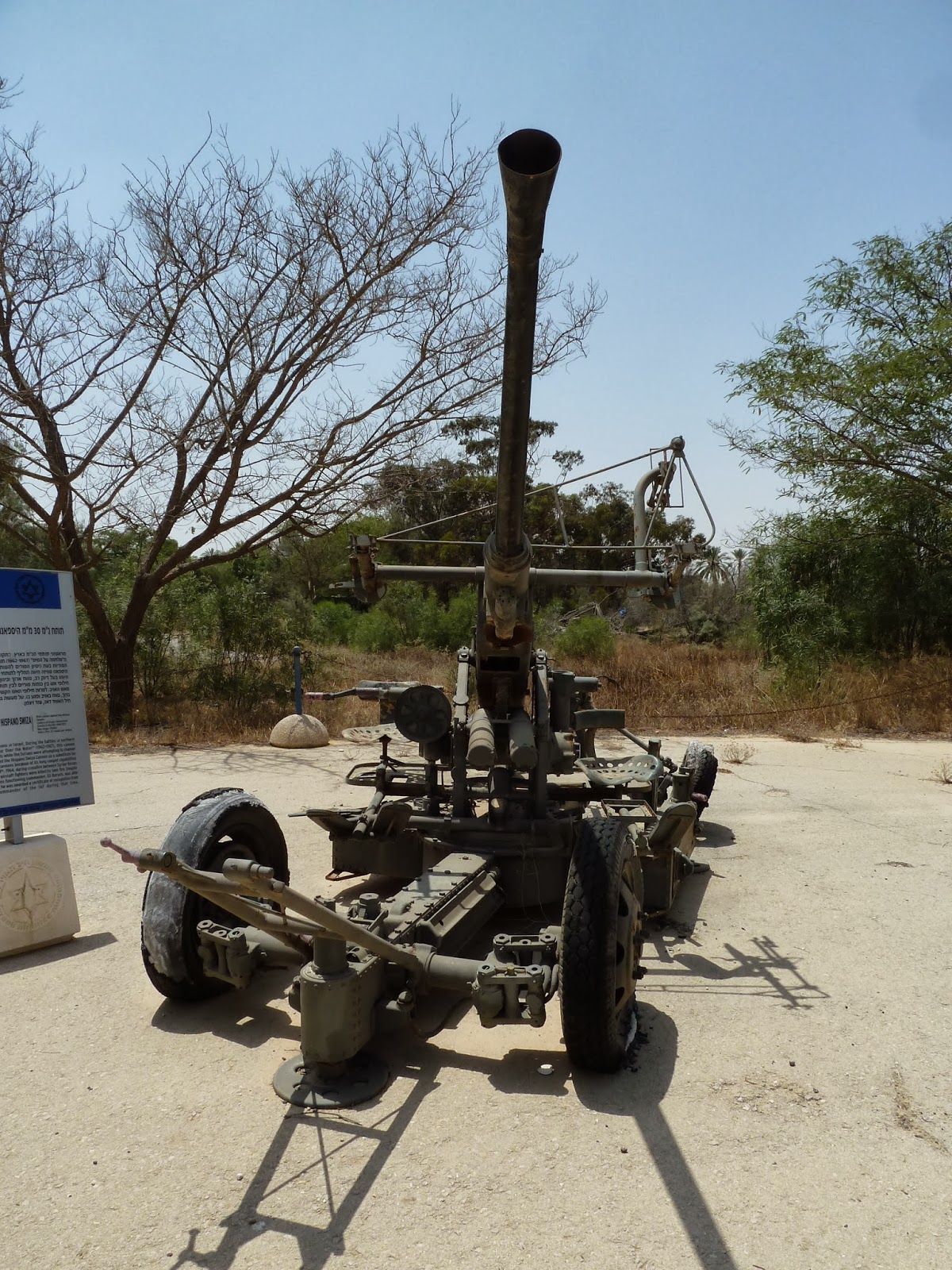 The Bofors Company made this manual cannon in 1928. Already in 1939 the Swedish company supplied these cannons to 8 countries (amongst them Britain). During WW2, Nazi planes attacked British targets in Israel. In defence, a British anti-aircraft regiment was established made up of mostly Jews. This Jewish regiment, stationed in Haifa, worked the 40mm anti-aircraft cannon under the command of Abraham Yaffe. During their stay in the area the brigade suceeded in downing several Italian enemy planes. In addition to fulfilling their duty to defend the name of the state of Israel, the fighters tended to smuggle in British weapons to the "Hagana" organization, which later became the IDF. During WW2, the jewish regiment was united with the British army in Europe, against Nazi land forces. With the end of war, the fighters aided captive jews in coming to Israel. These soldiers were the base for the establishment of the anti-aircraft formation in Israel. 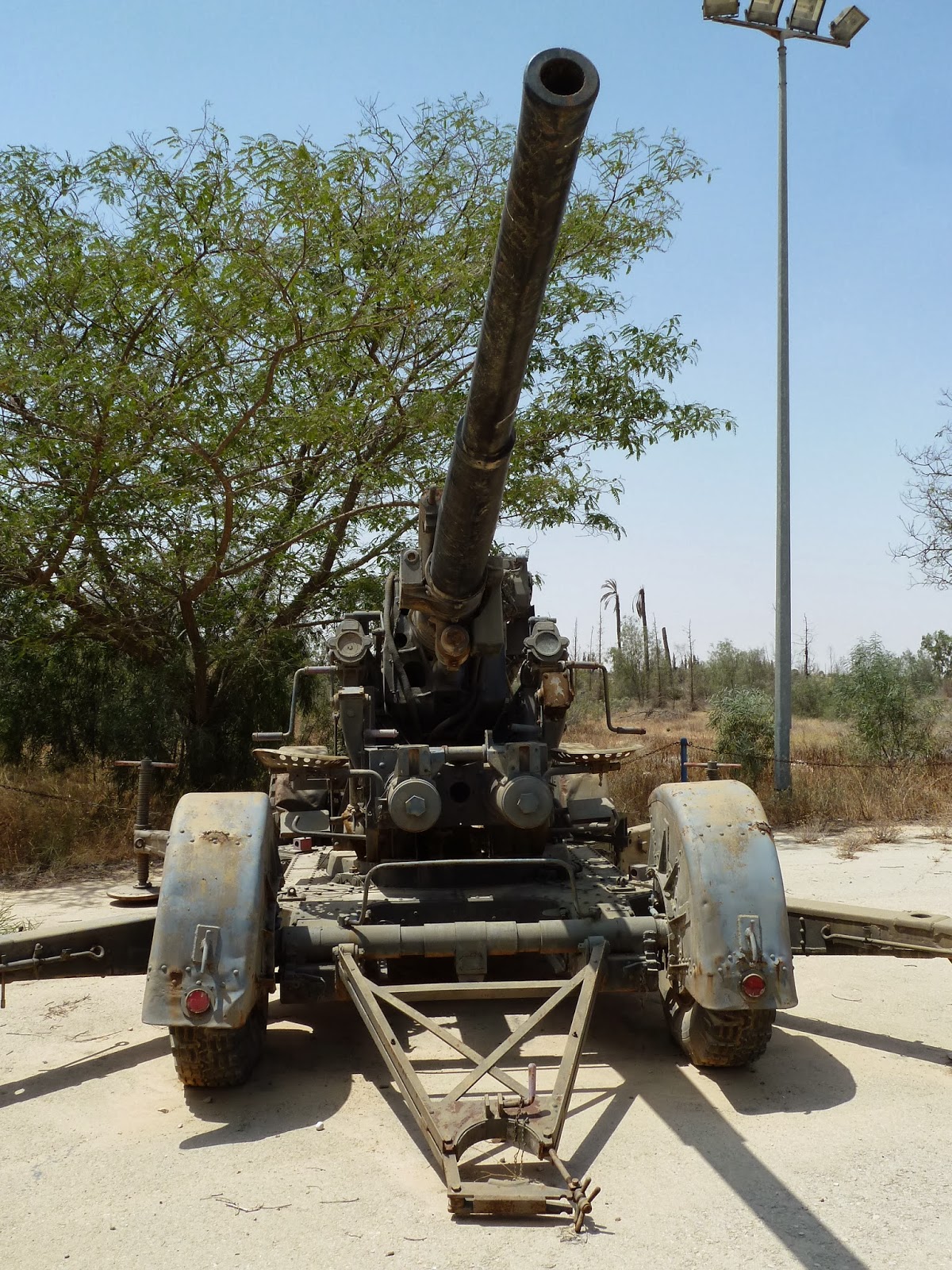 The first anti-aircraft radar guided system purchased by the IDF. The buying of this system caused a revolution in the anti-aircraft field which was until then based on manual cannons. The cannons has been smuggled and taken from the British as spoils of Israel's war and later purchased from Germany. On June 6th 1967, an Iraqi Topolov 16 bombed Netanya and the Meggido airport. Surrounding the Ramat David IAF base, which was near the attacking area, were batteries of 40mm L-70, 30mm and 20mm anti-aircraft cannons of the 881 unit. As a result of the heavy fog, the Topolov 16 appeared to the 881 unit's fighters only at a range of 500 meters. The 20mm, 30mm and the 40mm L-70 cannons fired at the bomber plane and downed it. With its crash 14 soldiers were killed. During the Yom Kippur War (1973) in their defence on IAF bases, the fighters of the anti-aircraft brigade of the 40mm cannons downed 10 enemy planes. 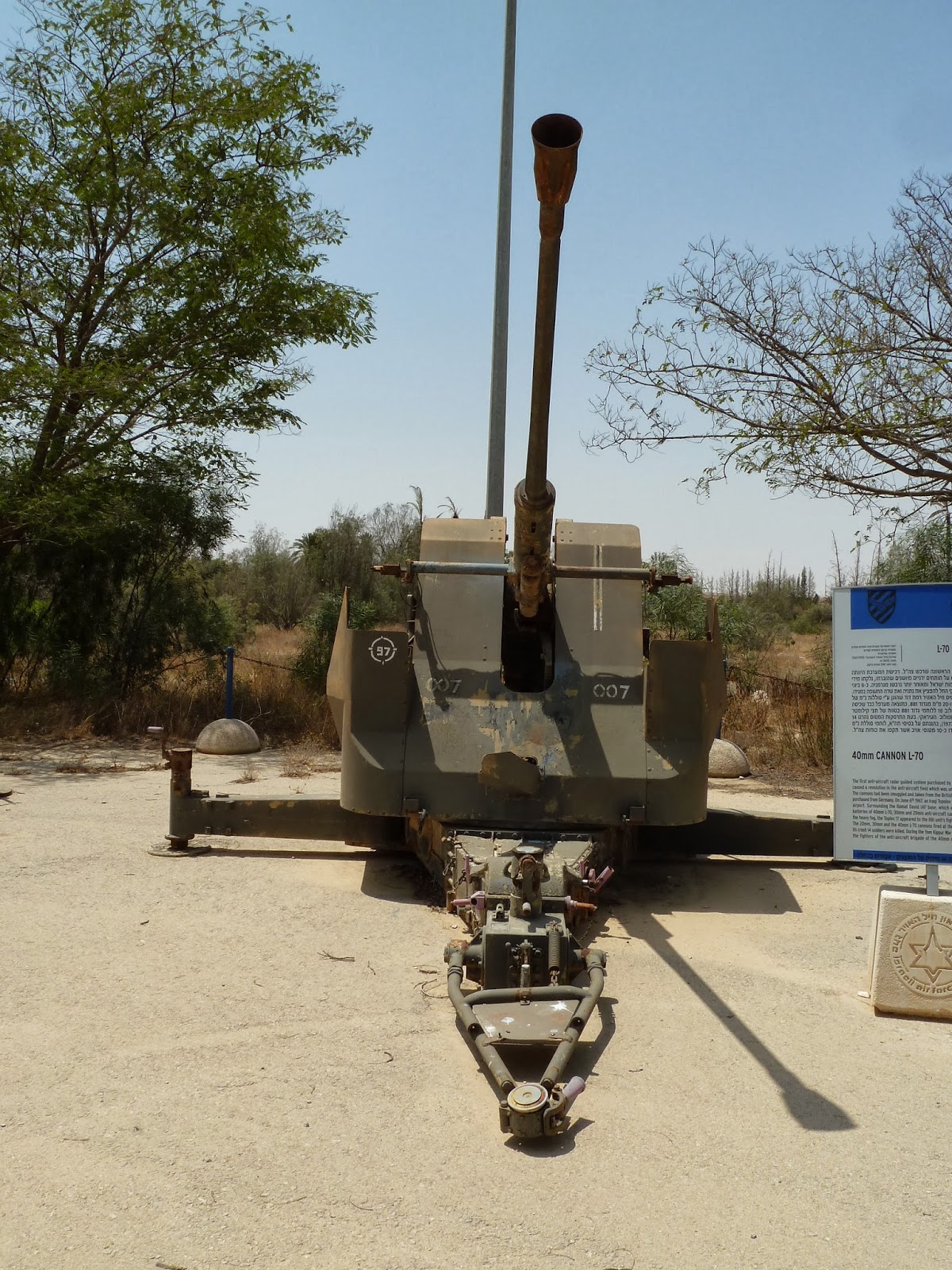 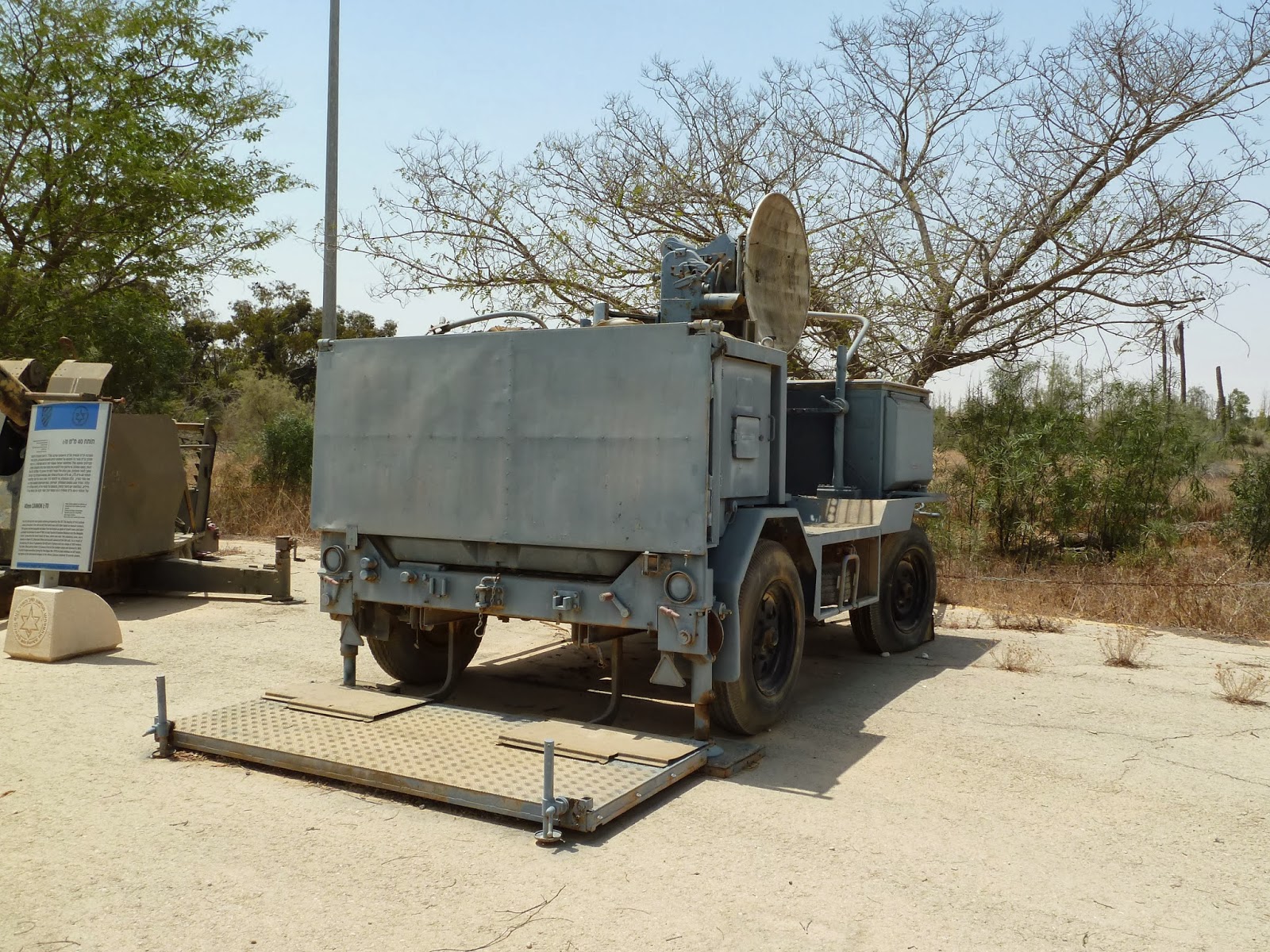 Soviet anti-aircraft weapon used by Arab countries for detecting radar. It fell into Israel's hands in the Six Day War (1967) and joined the Israeli anti-aircraft forces. The cannons were made as a substitute for the 37mm cannon because of the 57mm cannon's renovated trigger range, simple functioning methods and its fire control system. Today the system is used in more than 40 countries, among them: Egypt, Iran, Iraq and Syria 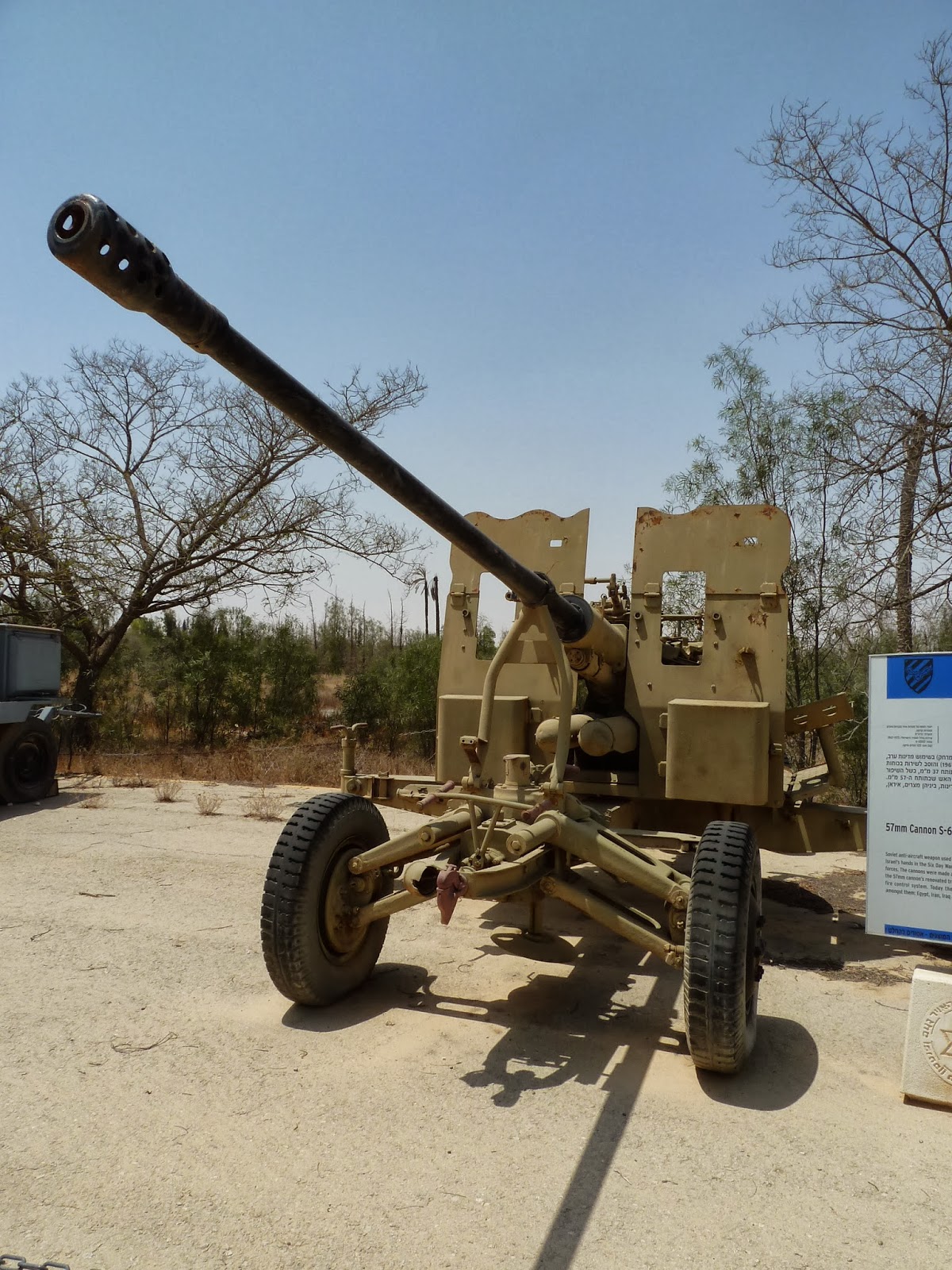 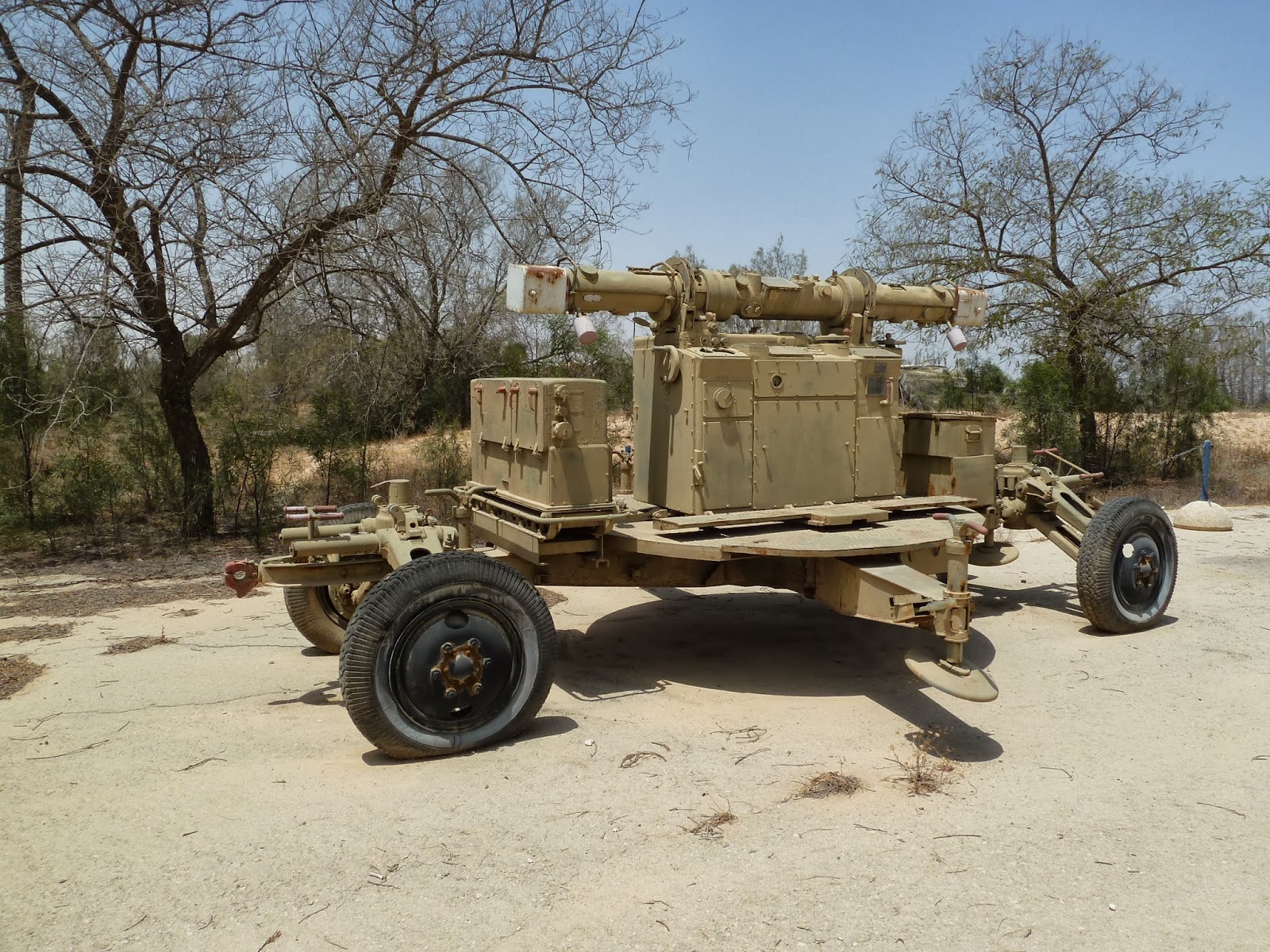 A loyal, manual anti-aircraft Soviet cannon which is simple to use and maintain. The Soviet Union supplied the cannon to Arab armies, so that with the end of the Six Day War (1967) and the Yom Kippur War (1973) the cannon fell into  Israel's hands and joined the IAF service. Functioning the cannon required exeptional coordination because of its steering methods. These cannons were used as defence forces for strategic points in Israel. The IAF was so precise in keeping enemy planes from defecting into Israel's skylines that the cannons didn't have the opportunity to down planes. 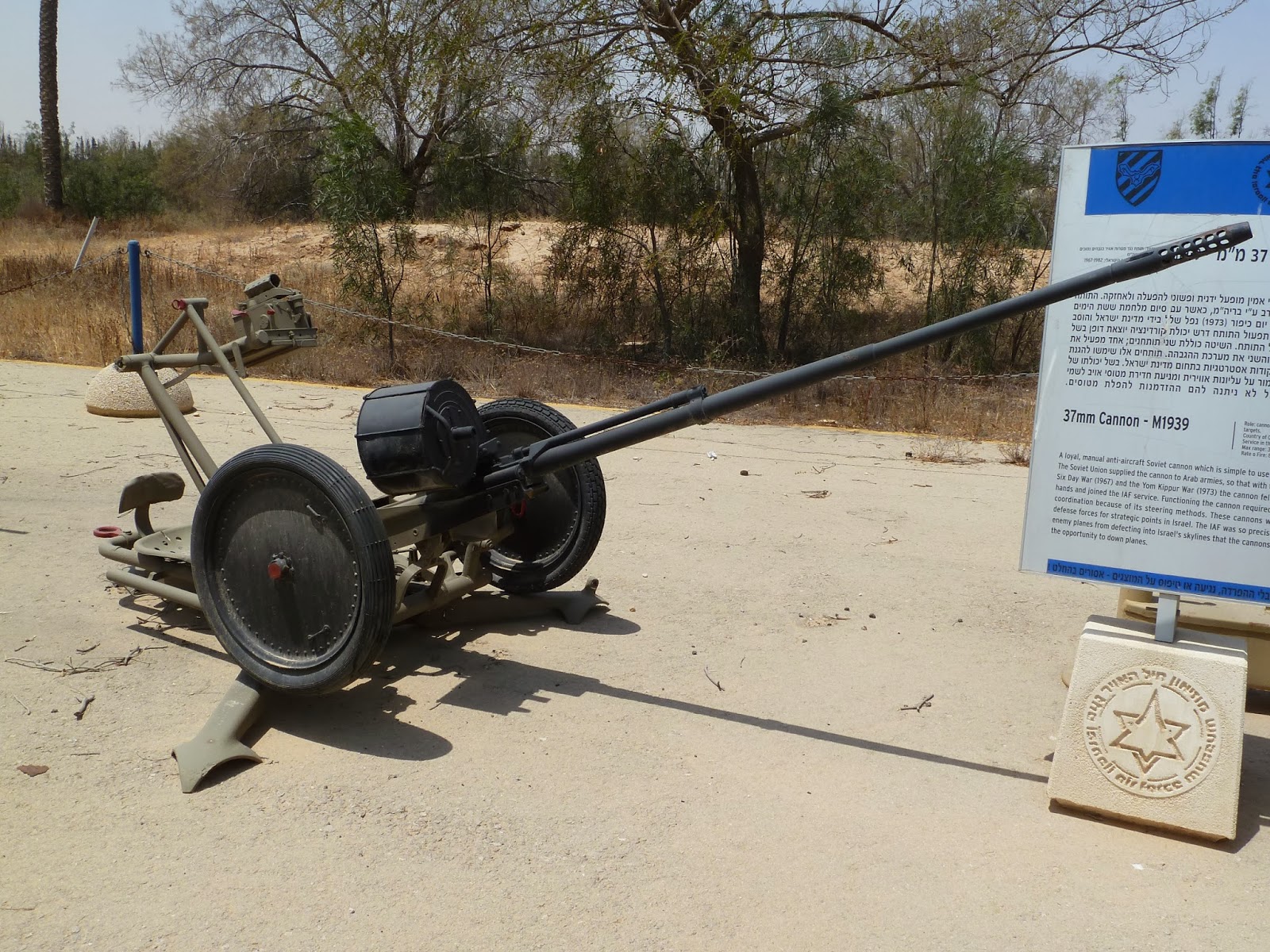 The "Gundish" was an extraordinary radar guided weapon system, which caused great losses of Israeli planes and helicopters. In the Yom Kippur War (1973), the "Gundish" was a main tool for the Syrian anti aircraft formation, which was able to hit 30% of the Israeli planes that were struck.With the end of operation 'Peace in Galillee" (1982), equipment fell into the hands of the IAF, among them were systems of the "Gundish" which established an anti-aircraft unit. 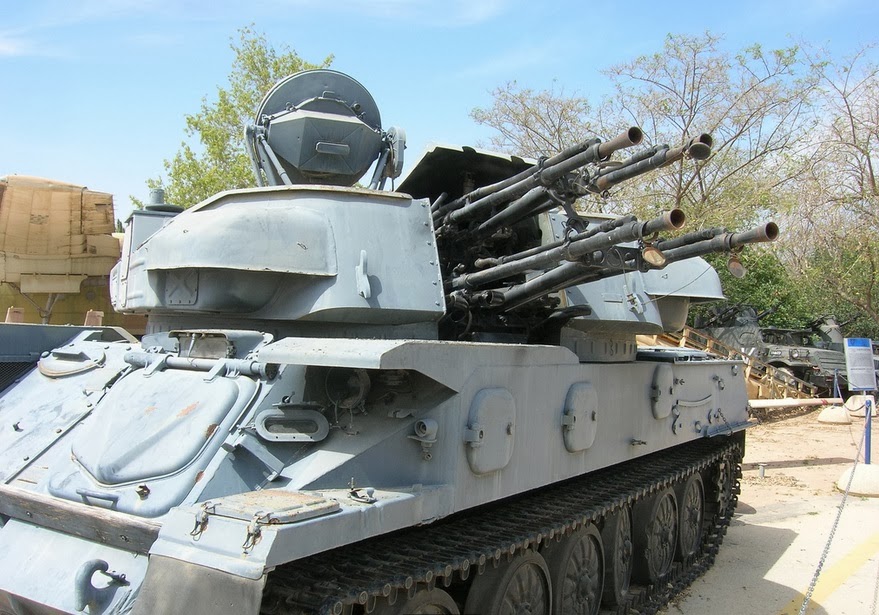 Soviet ground to air hot guided missile. The missile has been in use in Arab countries since the 1980's. In April 1981, the Palestine Liberation Organization (PLO) received SA-9 missiles from Libya. On May 28th, 1981 the IAF attacked and destroyed SA-9 batteries. Following the PLO's threat on Israel and the placement of the SA-9 and SA-6 missile batteries, the IAF opened an operation in Bekka Valley, Lebanon (9/6/1982). In this operation the IAF destroyed 19 batteries of ground to air missiles. 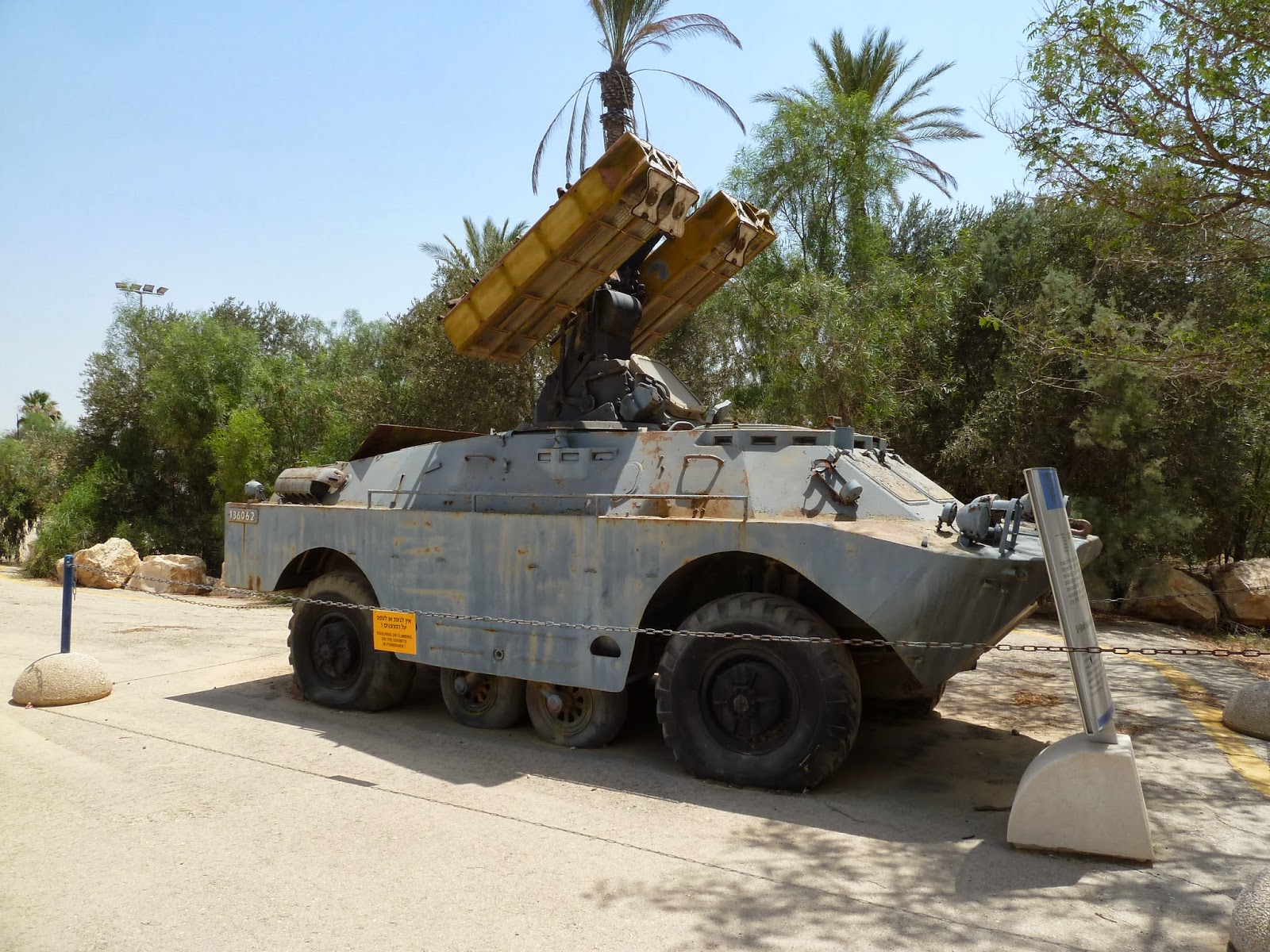 Soviet ground to air missile named "Goa". This missile arrived in Egypt after the Six Day War (1967) in order to complete Egypt's missile formation which was until then based on the stationary ground to air missile SA-2. During the Yom Kippur War (1973), Israel's Air Force superiority was damaged because of the Egyptian use of these missiles. Today, this missile system is in the hands of 35 countries. Amongst them: Algeria, Lybia, Egypt Iraq, Syria & Yemen.

A radar-guided missile system for downing high altitude planes. During the Six Day War (1967) the IAF fell upon these missile batteries for the first time. Despite their first hand acquaintance, the IAF succeeded i destroying 8 Egyptian SA-2 batteries and takin an additional battery as spoils of war for research purposes. As a lesson from their loss in the Six Day War, the Egyptians purchased SA-2 ground to air batteries from the Soviet Union. As a result of this purchase, many Israeli planes were hit by SA-2 missiles, and the IAF's aviation superiority was damaged in the Yom Kippur War (1973). On September 17th, 1971, a stratocuiser plane was on a reconnaissance mission in Egyptian territory. The cargo plane was hit at 30,000 feet. Only the mechanic, Major Hannaniah Gazit, escaped alive from the plane out of the 8 staff members who losty their live. 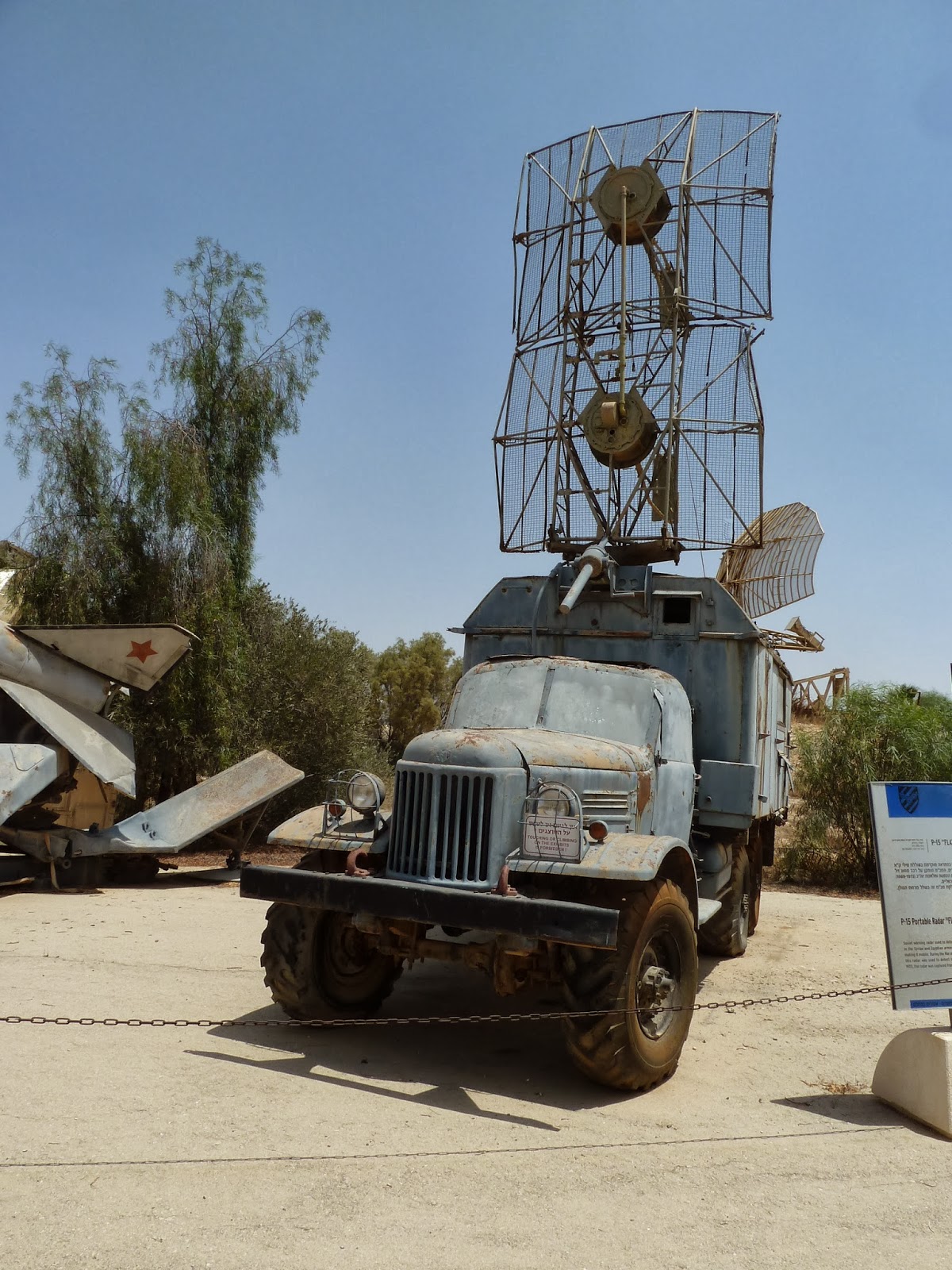 A portable ground to air missile used for defending Israel' strategic targets and air force bases. The battery holds 18 missiles, which are divided into 2 ammunition units. In each unit there are 3 launchers.

The Vulcan arrived in Israel during the Yom Kippur War (1973) in an American aiding aviation trade. The Vulcan was immediately studied and put into front line. On April 19th, 1981 a hot air balloon holding terrorists defected into Israel's borders. Despite the limited sight conditions, the APC Vulcan cannons downed the Hot air balloon. With its crash, crossfire kroke out between the terrorists and the IDF's anti-aircraft and infantry forces whihc were in the area. Eventually, the terrorists were defeated and the Vulcan made its first hit in Israel. In operation"Peace in Galilee" (1982), the Vulcan system was used for defending Israel's strategic points and aiding infantry forces in Lebanon. 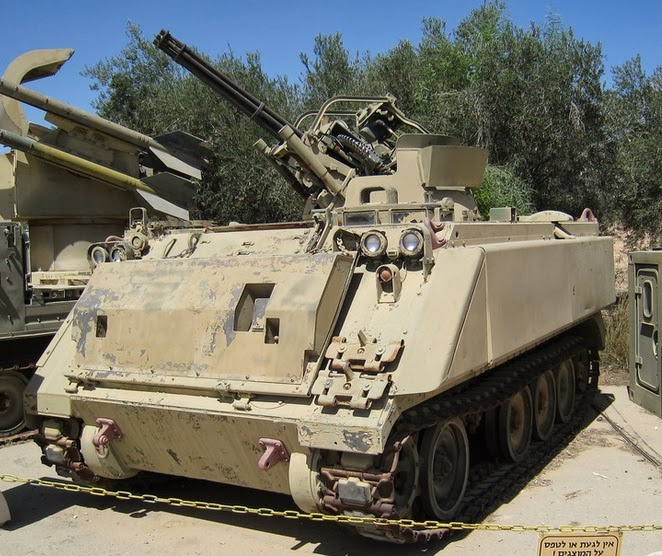