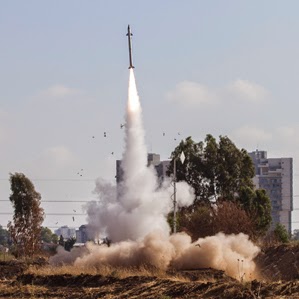 Even though Israel’s U.S.-funded “Iron Dome” rocket-defense interceptors appear to be hitting Hamas rockets in recent days, they are almost certainly failing in the crucial job of detonating those rockets’ shrapnel-packed explosive warheads, expert analysts say.

As a result, rockets fired from Gaza are probably plunging to the ground with intact explosives. The fact that they aren’t causing injuries or deaths in Tel Aviv, Jerusalem, and other cities is mainly a matter of luck, the analysts add.

On Thursday, the Israel Defense Forces said missiles from the system had intercepted 56 rockets fired out of Gaza, preventing strikes in several cities. Yet Richard Lloyd, a weapons expert and consultant who is a past Engineering Fellow at Raytheon Integrated Defense Systems, says that because these interceptions had almost certainly not detonated the rockets’ warheads, the system is essentially failing.

The Iron Dome system—meant to hit rockets traveling tens of miles from launch to landing—is a smaller cousin to the Patriot system, which attempts to hit much longer-range, faster incoming missiles. Iron Dome fires interceptors six inches wide and 10 feet long and uses sensors and real-time guidance systems to try to zero in on the rockets.

When an Iron Dome interceptor gets close to an incoming rocket, a proximity fuse triggers the interceptor to detonate, spraying out metal rods that are intended to strike and detonate the warheads on the incoming rockets, neutralizing their ability to maim people and destroy things on the ground.
Ted Postol, the MIT physicist and missile-defense expert who aided Lloyd’s analysis and who in 1991 debunked claims by the U.S. Army that its Patriot missiles were successfully shooting down Iraqi Scud missiles during the first Gulf War, agrees that they were failing in this crucial warhead-detonation job.

Postol had been an admirer of Iron Dome after initial reports of its performance during previous rocket assaults in 2012.But later analyses of interceptor contrails showed that its guidance system was behaving erratically. Instead of smoothly rising to meet their targets, the interceptors were making sharp turns and engaging from the side or behind, he says.
Those problems appear to be continuing, he says. “We expected that after more than a year and a half of time, whatever problems there were in the system related to guidance and control would be mitigated, or somewhat mitigated,” he says. “As it turns out, this is not the case. As far as we can tell, it is behaving in the same erratic way as it did in November 2012.”

The Iron Dome interceptors need to hit an incoming rocket head-on to have much hope of detonating a warhead, Lloyd says. And initial visual analysis of the engagements in recent days shows that the interceptions that are occurring are from the side or behind, which provide “essentially a zero chance of destroying the warhead,” based on the basic physics of such engagements, he adds.

Hamas rockets in late 2012 were going as far as 75 kilometers (47 miles) but some are now able to go twice as far.
Link
Publié par jkkljkljkljkl à 12:16 PM