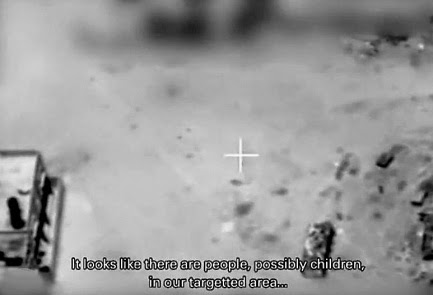 An Israeli Air Force pilot flying over the Gaza Strip on Thursday decided to abort his mission after spotting Palestinian children in the vicinity of a confirmed terror target, the Israel Defense Forces said Sunday.
In a video released by the IDF Spokesperson's Unit, the pilot is clearly heard telling the command center: "It looks like there are people, possibly children, in our targeted area." The response over the communication system states: "We're not going to strike this target now, let's move on."
The video's release came as foreign media reports began leveling criticism at the IDF over civilian casualties resulting from Operation Protective Edge's airstrikes on Gaza.


A senior IDF officer said that according to the military's data, some 30 percent of the casualties in Gaza are civilians. On Saturday, what the IDF described as an unusual incident occurred, in which 21 Palestinians were killed when the IAF struck the home of Hamas police chief in Gaza Tayseer al-Batsh, which was located near a mosque.
The Israeli military has gone to great lengths to minimize Palestinian casualties during the Gaza campaign. On Sunday morning, the IAF scattered thousands of leaflets over northern Gaza Strip neighborhoods, warning residents to evacuate their homes before noon. The IAF further issues warnings to residents of specific buildings identified as terror targets, warning them to evacuate before an imminent strike.
Hamas has repeatedly urged Gazans to ignore the Israeli warnings and remain in their homes.
The IDF reiterated Sunday that Palestinians "who ignore the warning place themselves and their families in danger."
Meanwhile, an opinion piece published by Business Insider magazine titled "Israel may be raising the moral standards of warfare," lauded Israel's efforts.
The piece, by political writer Will Saletan, originally appeared in Slate magazine, and said: "First, it's important not to get consumed by whether you love or hate Israel. ... Second, we don't need to debate the conduct of Hamas. Hamas rejects the whole idea that it's wrong to target civilians. So behaving better than Hamas isn't a standard worth talking about.
"Let’s focus instead on what Israel is doing," he wrote, commenting on what has been described by foreign media reports as the IDF's controversial practice of targeting terrorists' home. "The 'terrorists work from home' rationale raises ugly problems for the rules of war. Israel's warning procedures, however, could become a model."
According to Saletan, "In the history of warfare, this kind of systematic warning -- direct, specific, double-layered -- is unprecedented."
Although the article questions the consistency of the IDF's warning system, it concluded that "in some ways, Israel is raising the standards of what can be expected in warfare. Our job is to clarify those standards and hold everybody to them, including Israel."
Link