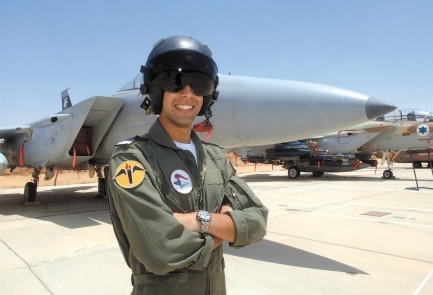 Lt. B., 21, who made aliyah from New Jersey in 2009 to serve in the IDF, will receive the coveted pilot's wings this week • "I knew from a young age that Israel was an amazing country, and that I was destined to fall in love with it," he says.

The Israel Air Force's newest group of pilots, Class 166, were all promoted to the rank of lieutenant on Monday, before they receive their coveted pilot's wings this Thursday.

"The rank you carry on your shoulders is a great privilege and also a great responsibility; it is a privilege to have been chosen from the best of the [nation's] youth, and at the same time it is an immense responsibility to ensure the continued existence of Israel as a Jewish and democratic state," Hatzerim Air Force base Commander Brig. Gen. Tal Kalman said on Monday.

Unlike recent previous graduating classes, there were no women in this class. More than half the graduates (54 percent) come from cities, 36% come from rural communities, and 10% hail from moshavim.

Lt. B., 21, who made aliyah from New Jersey in 2009 to serve in the Israel Defense Forces, will also be receiving his wings on Thursday. B.'s parents initially remained in the U.S. and supported him from afar, but two years ago they moved to Israel themselves, and will be among the proud parents at Thursday's ceremony.

The family's move to Israel brought them full circle.

"My mom is Israeli and served as a bureau chief at Hatzerim for five years before meeting my American dad, who was volunteering in the Negev. After they met she moved to the U.S., where I was born," B. said. 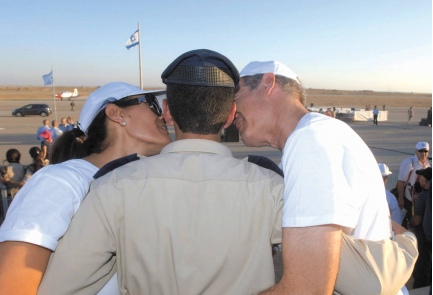 B. graduated from a religious high school in the U.S., and went straight to a year-long program at a military preparation school in the Golan Heights. The year gave him time to adjust to Israeli society, although he was already familiar with the country from his summer visits as a child.

"I knew from a young age that Israel was an amazing country, and that I was destined to fall in love with it," he said.

However, the move still proved difficult, despite his perfect Hebrew.

"There is a big difference between New Jersey and Israel, and it was hard for me to adjust, mainly due to cultural differences," he said. "There are good people in the both places, but in Israel the feeling is more familial, whereas in the U.S. things are more formal. It took me a long time to understand the mentality here."

B. said his friends in the pilots' course helped him deal with the language and social difficulties.

"One commander challenged me to read a book in Hebrew every month," he said. "I took up the task and read a lot, and my Hebrew improved dramatically."
Link
Publié par jkkljkljkljkl à 8:25 AM