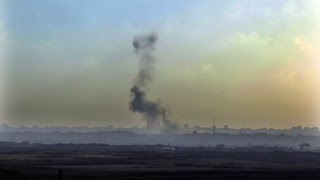 Israeli Air Force warplanes struck targets in the Gaza Strip on Monday night, the army said, in response to rocket fire on the south hours earlier. The two sites hit in the strikes belong to the Islamist Hamas organization, which controls the Strip.


IDF spokesman Lt. Col. Peter Lerner held Hamas responsible for the rocket fire, and warned that there would be “consequences” if it failed to rein in those carrying out the attacks on Israel.
“The intolerable reality of civilians continually living under the threat of Gaza rockets is unacceptable, unbearable and must stop. Hamas must enforce their responsibilities or face the consequences. We will act against those that attack us and hold those that enable attacks against Israel accountable,” Lerner said.
According to the IDF, the strike on Israel earlier Monday evening was the 18th rocket launched from Gaza to hit Israeli territory since January 2015.
The rocket fired from the Gaza Strip hit southern Israel, as air-raid sirens sounded across the communities adjacent to the Hamas-ruled Palestinian territory.
The IDF said the rocket, which landed in an open area in the Sha’ar Hanegev Regional Council, caused no injuries or damage.
Local residents reported hearing an explosion outside one of the Israeli communities adjacent to the border fence.
Link
Publié par jkkljkljkljkl à 7:54 AM