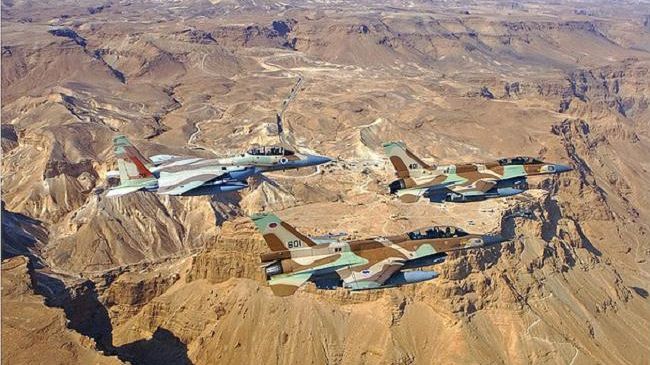 The Israeli air force struck a Palestinian group in Lebanon on Friday, officials said, hours after a different organization said it fired four rockets at the Jewish state from Lebanon.

Israeli aircraft "targeted a terror site located between Beirut and Sidon in response to a barrage of four rockets launched at northern Israel yesterday [Thursday]," the military said.
"The pilots reported direct hits to the target."

Lebanon's NNA news agency said the target was a position of the Popular Front for the Liberation of Palestine - General Command (PFLP-GC), a hard-line but secular militant group which said it had nothing to do with Thursday's rocket fire.

The salvo of four rockets, which caused damage but no casualties, was claimed by the Abdullah Azzam Brigades -- an al-Qaida-linked group which claimed similar rocket fire on Israel in 2009 and 2011.

Israeli army spokesman Brigadier General Yoav Mordechai said on Thursday that the rockets were "launched by the global jihad terror orgazisation" -- an apparent reference to al-Qaida.

Israeli Prime Minister Benjamin Netanyahu had threatened retaliation. "Anyone who harms us, or tries to harm us, should know -- we will strike them," he said on Thursday.

Two of the four rockets fired from Lebanon on Thursday hit populated areas of northern Israel, causing damage but no casualties.

One struck in Gesher Haziv, a kibbutz east of the Mediterranean coastal town of Nahariya, AFP correspondents reported. Another hit Shavie Zion, a village between Nahariya and Acre, further south, Israeli media said.

A third rocket was intercepted by Israel's Iron Dome defense system, the army said. The fourth apparently struck outside Israel.

Thursday's attack was the first of its kind since November 2011, when the same Palestinian jihadist group fired a volley of rockets from southern Lebanon at Israel. That fire too provoked retaliation by the Israeli military.

Defense sources said that the PFLP-GC base hit was in the Naameh valley. The Palestinian group has a number of heavily fortified positions in Lebanon.

Headed by Ahmed Jibril, the group is known for close ties with the Syrian regime of President Bashar Assad.

PFLP-GC spokesman Ramez Mustapha denied any link between his group and the rockets fired at Israel on Thursday.

In its Friday statement, the Israeli army again said it "holds the Lebanese government accountable for the attack".

On Thursday, Lebanese President Michel Sleiman described the rocket fire as a violation of UN resolutions and of Lebanese sovereignty, and urged security forces to hunt down the perpetrators and bring them to justice.
Link
Publié par jkkljkljkljkl à 8:47 AM