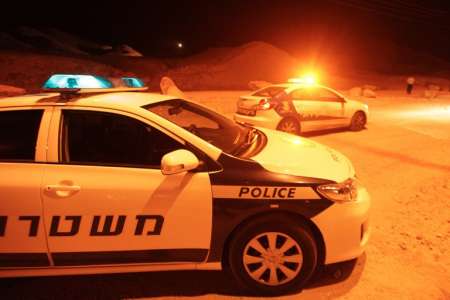 The Iron Dome defense system has early Tuesday successfully intercepted a Grad rocket aimed at the southern resort town of Eilat. Emergency services reported three persons were being treated for anxiety attacks. No damage to property was reported.

Eilat residents said they heard the blare of an emergency siren shortly before 1 am, immediately followed by echoes of two explosions in the vicinity. The IDF and police have combed the area for further landing sites.

Egyptian security sources in the Sinai said the Grad rocket originated from a desert area near the Israeli border and could have been launched remotely, reported Israel Radio. Local Bedouins are helping Egyptian authorities to locate the exact launch site.

According to a Channel 10 report, Ansar Bayt al-Maqdis, a Sinai-based jihadist group affiliated with al-Qaida that was allegedly attacked by Israel last Friday - has claimed responsibility for the numerous Grad rockets fired at Eilat. ​

“This was a response to the latest crimes by the Jews, who used a drone to attack and kill four of our fighters in Sinai,” the group said in a statement. “The fighters managed to bomb occupied ‘Um Rashrash’ [the Arabic name for Eilat], with Grad missiles. The attack sowed fear among the criminal Jews, who were forced into underground bomb shelters.”

On Saturday the group issued a statement saying its fighters were the target of a drone attack Friday in the northern Sinai peninsula, which unnamed Egyptian security officials said had killed five suspected Islamic militants and destroyed a rocket launcher. While al-Qaida blamed the attack on Israel, Egypt's armed forces said that one of its helicopters carried out the attack to crack down on al-Qaida in the Sinai.

“Our heroes became martyrs during their jihadi duties against the Jews in a rocket attack on occupied lands,” the Ansar Bayt al-Maqdis organization said on a jihadist website. The group claimed four its members were killed as they prepared to launch a rocket attack into Israel. The leader of the rocket squad has escaped, according to the statement.

Mujahideen Shura Council in the Environs of Jerusalem, a jihad organization operating in Gaza and Sinai, also claimed responsibility for the rocket attack on Eilat Monday night, issuing a statement similar to that of Ansar Bayt al-Maqdis which said that the rocket was launched to avenge the killing of four militant of extremist Salafi group Ansar Bayt Al-Maqdis on Friday, claiming the attack was carried out by "a Jewish unmanned aircraft".

The alleged drone strike came on the heels of a warning of Egyptian security officials, who reportedly informed Israel that jihadists in the Sinai Peninsula had come into possession of rockets with a range of over 70km and were planning an attack on Israeli targets including Eilat's airport, reported the Palestinian Ma'an news agency on Friday. That warning likely caused the two-hour closure of the airport on Thursday.

Eilat Mayor Meir Yitzhak Halevi told reporters that life in the city had returned to normal and he was not aware of any tourist departures. Like other Israeli cities, we have become accustomed to the reality of rockets. We expect the IDF to continue protecting our citizens and find those responsible for the attack,” said Halevi.

According to Ynetnews, the IDF installed an Iron Dome battery in Eilat last month. The battery was deployed at the peak of the tourist season for fear the city could become the target of rocket fire. The city's siren system is connected to the alert systems installed on the Israel-Egypt border; thus the launch of rockets toward the city triggers the siren system.
Link
Publié par jkkljkljkljkl à 8:39 AM