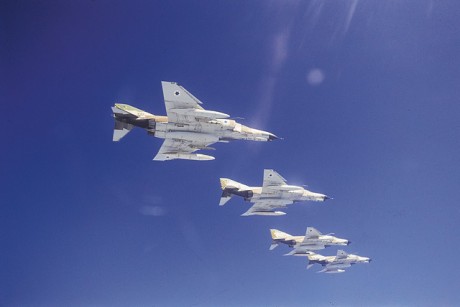 Even if the McDonnell Douglas F-4 was developed as interceptor in response to the need of the U.S. Navy to protect their aircraft carrier, the ultimate version of the Phantom II was the USAF F-4E, a multi role fighter which was also sold to several air forces around the world. One of the countries to receive the F-4E was Israel that bought the first examples in 1969 and later made the Phantom the mainstay of its Air Power bringing the F-4 in all the major Arab-Israeli conflicts.

In 1973, during the Yom Kippur War, the Israeli Air force (IAF) found itself facing an Arab Air Forces coalition which was composed not only by Egyptian and Syrian fighter squadrons, but also by units from Algeria, Iraq, Libya and … North Korea, that deployed a MiG-21 squadron to Bir Arida to protect Egypt’s south.

Obviously, at the time,  IAF pilots didn’t know that some of the MiGs they would face were from North Korea. However the first engagement between North Korean pilots and Israeli pilots took place on Oct. 6, 1973 when two F-4 Kurnass (Sledgehammer) pairs from 69 and 119 Squadrons were scrambled from Ramat David Air Base for a patrol over the Gulf of Suez sector.

The F-4s of the two squadrons were teamed together and the 69 pair (which had their crews formed by Shadmi and Gur on board the first aircraft and Shpitzer and Ofer on the other one)  leading the mission.

It was only after a long patrol, when the jets were already low on fuel, that the F-4s were vectored towards Egypt’s west-northwest: although the high altitude, between 20,000 and 25,000 feet, Gur was able to detect with its radar a pair of bandits down below, very hard to lock. Thanks to the GCI (Ground Control Intercept) the crews could track the two enemy aircraft and enter in the range for an AIM-7 shot, despite the ground clutter. But due to the bad weather they were unable to see their wingman, so Shadmi and Gur decided not to lunch the Sparrow.

Just few seconds later the two F-4s’ crews identified the two bandits as a couple of MiG-21s and immediately engaged them: one of the MiG disappeared, while the other Fishbed stayed for a 1 vs 2 combat. The North Korean pilot was very good and, despite the fact it was alone against the two Kurnass (plus the two 119 Squadron F-4s which were flying overhead), tried to slow the speed in a dogfight attempting. But the two Israeli fighters maintained high speed, they got into missiles launch position and Shadmi and Gur launched an AIM-9D. After a second, they launched another Sidewinder which was followed by a third AIM-9D launched by Shpitzer and Ofer from the other Kurnass.

All the missiles exploded very close to the MiG, but the Fishbed continued flying. At this point, the Israeli Kurnass were already low on fuel and they turned east heading home. Gur looked at the MiG and while it turned west, he noticed the Fishbed was leaving a white smoke trail. Suddenly after the F-4s crossed the coastline, Gur saw the trail of a SAM and then an explosion at 20,000 feet, where before there was the MiG-21: Egyptians shot down one of their aircraft!

The pilots knew only when the war ended that the MiG-21 belonged to North Korea, while after the Kurnass landed, Shadmi and Gur shared the kill with Shpitzer and Ofer because they were notified that the MiG had crashed. But the crews told what they saw and in fact later it was confirmed by the IAF Intelligence that the Egyptian Air Defense Force shot down one of their Fishbeds.
Link
Publié par jkkljkljkljkl à 12:29 PM