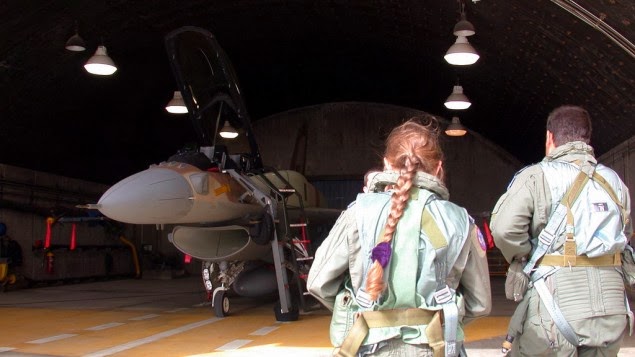 “In 1995 the first female cadets arrived at the flight school and since then the IAF has gone quite a ways toward integrating women,” said Lt. Col. Dr. Yifat Ehrlich, the commander of the IAF’s flight medical unit. “There are combat airwomen now and their needs must be addressed.”


The first woman to fly in the IAF was Zahara Levitov, a Palmach fighter who moved to the US during the British Mandate period, studied medicine at Columbia University and trained as a pilot in California. When the War of Independence broke out, she returned to Israel and flew combat missions during the conflict until a fatal plane crash in August 1948.

Two years later, Yael Rom became the first woman pilot to graduate from the newly founded IAF Flight School. In 1956, during the Suez War, she co-piloted the lead plane that dropped the Paratroops at the mouth of the Mitla Pass, deep in the Sinai Desert.
But at around the same time, while the IAF was establishing itself as a true air force, it stopped accepting female cadets. Only in 1994 did Alice Miller, a trained civilian pilot and an officer in the IAF, appeal to the High Court of Justice to break the gender discrimination.

In 1995, against the wishes of Maj. Gen. Herzl Bodinger, the commander of the IAF at the time, the Court ruled that the IAF could not bar candidates on the basis of gender alone.

Miller was found unfit to enroll in the highly competitive course. But others quickly followed in her footsteps. In December 1998 Sari Rahat of Raanana, an F-16 navigator, became the first woman to graduate from the course. In 2001, Roni Zuckerman, the granddaughter of two of the leaders of the Warsaw Ghetto Uprising, Antek Zuckerman and Zvia Lubetkin, became the first woman to graduate as a fighter pilot. She nearly took top honors in the course and was picked to fly in an elite F-16 squadron.

In the past all female pilots were grounded for the duration of their pregnancies. Starting in 2014, transport plane pilots will be allowed to fly until the 25th week of pregnancy, the IAF quarterly reported, with a limit of four hours of air time per day, at or below 8,000 feet and with an additional airman or woman in the cockpit.

The pregnant pilots will have to be examined by a physician before each flight and have their eyesight checked once every month.

Dr. Ehrlich, the commander of the IAF’s flight medical unit, told the IAF quarterly that, “today, it has been proven yet again, that if women want it, they can do it.”
Link
Publié par jkkljkljkljkl à 8:28 AM