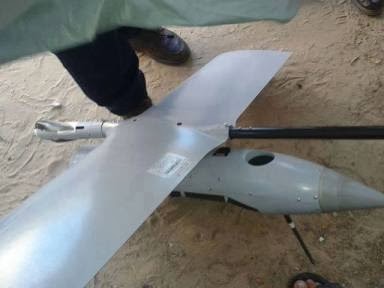 
Hamas’s military wing claimed it shot down the unmanned aerial vehicle. The al-Qassam Brigades wrote on Twitter that it had downed the drone with what it called a “mini-drone.”
The Israel Defense Forces denied the report, saying its drone crashed from a technical malfunction. ”In contradiction to the Palestinian reports, there was a Skylark tactical mini UAV system that crashed in the northern Gaza Strip due to a technical malfunction,” an IDF spokesperson said.
"a UAV 'Skylark' crashed a short time ago due to technical issues.It was not shot down."
A photo published on the Facebook page of the Palestinian Quds news agency claimed to show the crashed drone.
The Skylark, operated by the field troops from the Artillery Corps, is a 7.5 kilogram drone that is launched by infantry and can send live video footage back to operators in the field. It is is used primarily for surveillance and intelligence-gathering.
In 2012, a Skylark crashed near Nablus in the West Bank and was recovered by IDF troops.
Reportedly, Hamas was to hold a press conference later in the day at which it would show off the drone.
In 2007, a similar drone crashed in northern Gaza from a technical malfunction and Hamas also claimed responsibility, showing off pictures at a press conference.
Link
Publié par jkkljkljkljkl à 1:01 PM