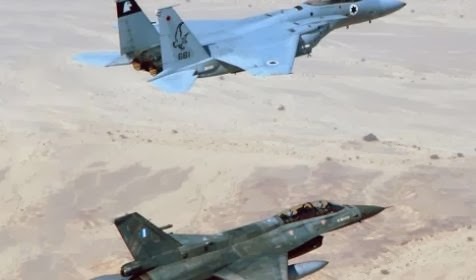 U.S., Greek, Polish and Italian fighter jets are planned to deploy to Ovda Israel Air Force Base this month, to participate in the Israel Air Force’s ‘Blue Flag’ air warfare exercise over the southern Negev Desert. Over 100 aircraft and about a thousand air and ground crews are expected to participate. Israeli sources have not confirmed the specific nations taking part in the exercise but foreign sources have indicated these are likely to include Greece, Poland, Italy, the US and Israel.

Each of these air forces have already trained separately with the IAF, and some were also deployed here for training, but the ‘Blue Flag’ will be the first opportunity for the IAF to conduct a multinational exercise of this scale, since Israel was excluded from the NATO ‘Anatolian Eagle’ exercise as a result from the deteriorating relations between Turkey and Israel in recent years. Foreign air forces have been flying the Eager Tiger and Eager Lion exercises in Jordan for several years but for the Israelis, the ‘Blue Flag’ is a first of a kind opportunity.

The exercise will employ the IAF Aggressor squadron based at Ovda, and scores of ground based targets and air defense assets positioned throughout the southern Negev, simulating a modern threat environment. While the aggressor role is similar to that of the US “Top Gun” school and ‘Red Flag’ exercises, the aggressor role is tasked on different squadrons every 24 months, thus keeping pilots combat ready and proficient in the IAF combat missions. The squadron flies F-16A Block 15 Falcons, in service with the IAF since 1980.

The IAF conducted a ‘grand rehearsal’ in January 2013, deploying five squadrons to the southern base, simulating a surge in missions and operational tempo conducted over several days. For the actual exercise the visiting air forces will deploy to Ovda on November 13, for orientation and preparation, with the exercise itself staged between 17 and 28 November.
Link
Publié par jkkljkljkljkl à 9:15 AM