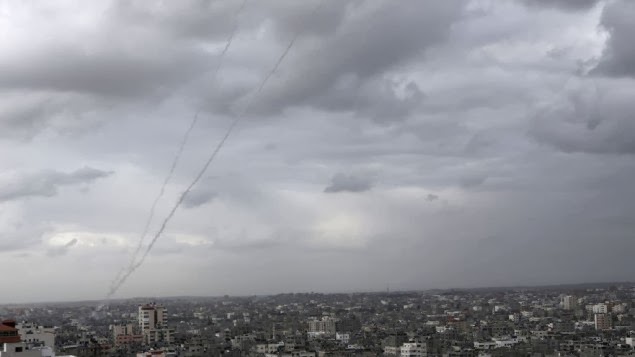 The Israeli Air Force launched airstrikes in the Gaza Strip shortly after 10 p.m. on Wednesday in retaliation for a massive rocket barrage earlier in the day, the largest of its kind since Israeli planes struck at least five strategic points in the coastal enclave, primarily in areas around the cities of Khan Younis and Rafah.


No Palestinian injuries were initially reported.
Earlier, Israel warned that it would hit back hard at Gaza terror groups, after more than 50 rockets at southern Israel.
Aircraft targeted bases of the armed wing of Islamic Jihad, which had claimed the rocket attacks, Palestinian witnesses said.
Although the rocket fire subsided late in the evening, Israel raised its security alert in the south, and residents were told to stay within 15 seconds of rooms reinforced against rockets, amid indications that the dramatically escalated new round of confrontation was not over.
At least two rockets from Gaza fell in residential areas, one of them causing light damage in Sderot. There were no direct injuries, but a Sderot woman, aged 57, was lightly hurt as she ran for cover.
“If there is no quiet in our south, no quiet for the residents of Israel, there will be noise, lots of noise in Gaza,” Prime Minister Benjamin Netanyahu said at a joint press conference with his British counterpart, David Cameron.
The US State Department decried the barrage of rockets from the Gaza Strip on Wednesday, referring to it as “reprehensible,” and stressing that Israel reserves the right to protect its citizens.
“The United States condemns in the strongest terms today’s rocket attacks into Israel by terrorists from the Gaza Strip,” read a statement from spokeswoman Jen Psaki.
“There is no justification for such attacks. We call for these terrorist attacks to cease immediately. Israel, like any nation, has a right to defend itself.”
The Islamic Jihad terror group took credit for the attacks, saying they were a retaliation for Israel’s killing of three of its operatives on Tuesday and that it signaled the start of an ongoing campaign.
Link
Publié par jkkljkljkljkl à 9:54 PM